Around the World: Flores Island 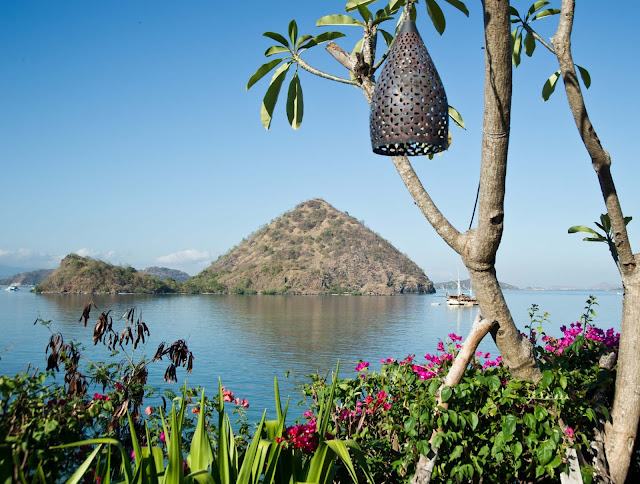 In our last post I said that Bali and Sumba were the dream duo. Now that we have been to Flores and the Komodo Islands, I would certainly add this destination to create the dreamiest itinerary for those seeking adventure both over and under the seas.

We had five nights in Flores and stayed at the nicest hotel near Labuan Bajo, a four star property in a secluded cove that needs a slight bit of polishing. Given the island conditions, it was easily the most luxurious choice on land. We loved that it was on the beach and had a sense of place with Indonesian décor. It certainly had room for improvement and I think some changes will be made now that competition is moving in. We could see a lot of construction taking place and were told that two five star luxury hotels were in the process of being built. Things are about to change so if you want the small village, local, relaxed and authentic feel, go now. If you are a five star luxury type, best to wait unless you opt to explore on private yacht or with a luxury cruise such as Amandira or Amanikan. You can certainly leave any formal wear at home and even your makeup. This is a place for sandals and t-shirts. It is also a place in which travel is friendly on the wallet.

The town of Labuan Bajo is a small port town with the usual mix of broken sidewalks, motorbikes, and chaos. It is not a destination in itself but you will find a couple of good restaurants such as BajoTaco which serves decent Tex mex and La Cucina which makes a tasty pizza. It certainly appears that every other storefront is a diving shop which tells you a lot about who is visiting and why. Most of the tourists we came across were young Europeans.

Before we arrived I had reached out to two different charities that I had found online including one about bringing books to children. I was keen to check them out but sadly I never hear back. I could see in the town that there was a movement  called Trash Hero which promotes wasting as little as possible and working to improve the spaces you are in. As we have seen in many parts of Indonesia already, trash in the water and beaches is an obvious problem and Indonesia is one of the largest contributors to this issue. We spent time picking up plastic that we found on our beach and in the water outside the hotel. I know that I have said it before, but these travels have seriously impacted how we will view our use of plastic going forward. There is nothing like seeing and experiencing in person.

We spent a little bit of time researching and talking to others about what to do during our stay and though there were some inland options, seeing the Komodo dragon, diving, and snorkeling were the absolute must experience activities. We looked into various boat options and after a bit of bargaining, we splurged and opted for a Phinisi vessel. It was one of our best decisions so far. If Julia were older, we would have opted for a live aboard for a night or two, which is a very popular choice.

We were picked up early in the morning and greeted with fresh juice once on board. We had staff including the captain, ship crew, dive master, cook, and guide. There are literally thousands of islands in Indonesia and boating around a few of them in this area was both beautiful and peaceful. We made three different stops for diving and though we both would have loved to go, I thought it best to stay with the kids and let John have his turn. After John and his guide were below water on the first dive, the kids and I were driven by dingy to a beach near by to play on the secluded beach. James was given snorkel equipment and a life vest. It has been amazing to see how quickly he has become a strong swimmer. John emerged from the dive after about an hour and the smile on his face told me everything I needed to know. The diving was good….really good. We had two additional stops including Manta point which is where you can often see Manta Rays. We both saw gorgeous fish, coral, turtles and more. 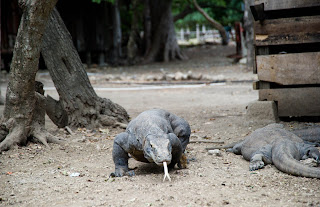 After a massive lunch of fish and rice to fill our bellies, we sailed again to see the Komodo dragon. There are basically two places to see the Komodo Dragon, which are Komodo Island and Rinca. Komodo Island is a little bit farther away and so we stopped at Rinca. Apparently the Komodo dragons grow a bit larger on Komodo so if you are really into it these large lizards, head to Komodo. You have to pay an entrance fee to the park upon arrival and you are escorted by a park ranger. Each park ranger carries a long stick with a v shape at the end. Ours explained that if the Komodo was to come after us, he aims the V shape of the stick for the neck and it stops it. It wasn’t the most reassuring and I did worry a bit that these massive lizards may like the look of Julia given they attack and eat large animals such as Timor deer.

Our experience trekking on Rinca was like a walking safari and we saw a number of Komodo dragons, deer, water buffalo and other animals. The Komodo Dragon was a sight to see and though they mostly lay around, when one would get up to move, it was exciting. They are massive and a sight to see.

From Rinca Island we headed back to the hotel. Around sunset we stopped near an island and one of the crew pointed at the sky saying to us, “Flying Foxes.” I looked up and could see hundreds or even thousands of bats. A number of other boats were parked around to watch them fly. Bats give me the creeps but this sight was beautiful.
For the remainder of the journey we laid down on the top deck looking up at the sky with a gentle breeze lulling Julia to sleep. I would have easily slept there for the night. 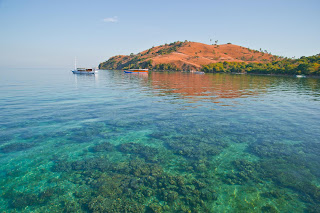 Given our experience was so good, we hired a much smaller local boat another day to take us to different islands to snorkel. This boat was a brightly colored wooden boat including a crew of four, snorkel gear and lunch. If you share a boat or jump on one of the public options, you can get out to snorkel and dive for very cheap.

Our guide for this day, Roy, grew up in Labuan Bajo. We actually had a chance to talk at length, which those of you with little kids know, can be rare. We spoke about life, religion, career and charitable work. In his opinion, education is the most important cause to invest in as for Flores, a number of children find work fishing or doing small tasks and don’t see the long term value in schooling when they can earn money now. He then went to tell me about his time volunteering with the poor in Cebu. He talked about serving them and how poor they were. I asked the obvious, “Aren’t there poor here in Flores?” to which he responded by saying, “yes, but we have food and clothing and at least a simple home. There were people in Cebu that had nothing to eat for days. I know because we lived with them and some days we could not manage even food to eat. I feel so sorry for them.” The fact that Roy, who likely would be considered poor by first world standards, gave of his time to serve the poor in another country humbled us. It reminded me of the Biblical verse about the woman who though she had little to give, was praised above the one who gave a larger amount because she gave from what little she had and he gave from plenty.
We hired a taxi driver to take us into town that evening for dinner. His name was Ferdinand and he told us that he was also a tour guide. After chatting for a while and learning that he was a kind man who knew many facts about the area, we decided to hire him for the following day to take us to Batu Cermin cave.

At 8am on our last day Ferdinand met us at the hotel with his 4-year-old son Michael. He had told us about his family before and I asked him to bring his son so was thrilled that he did. On our car ride to Batu Cermin Michael and James sat next to each other in the back seat smiling and laughing. Michael spoke little English and James almost no Bahasa and yet it seemed to matter not. We encouraged James to try speaking a little in Bahasa and Michael practiced his English. I only wished I had taken a video of the moment.
When we arrived at the cave the boys jumped out of the car and immediately started a game of tag. The caves were a fantastic place for them to discover and explore. James was convinced that it was Batman’s home. At the end of our explorations we were hot and sweaty so we bought some young coconuts for all to enjoy and then headed back to the hotel to pack before heading off to the airport. 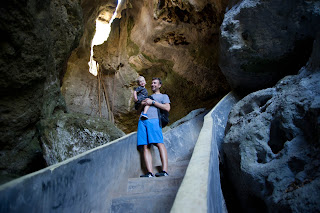 We had a great time in Flores and hope to return one day when the kids are a bit older and we can stay on a boat and dive. 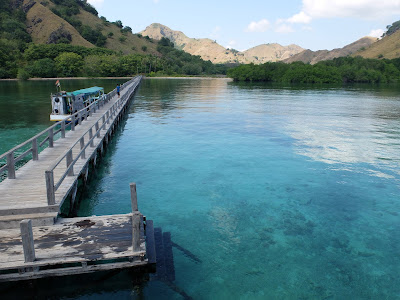 You will need cash as many on the island prefer to deal in cash versus credit card. Many ATMs limit the withdrawal to 150 million IDR, which is about $150 so depending on how much money you need, you will likely have several trips to the ATM.

Safety regulations on the island and for Indonesia in general are rather lenient. When taking taxis or transfers, do not expect them to have a car seat for your kids. After all, this is a country in which entire families of four with young kids will drive around on one motorcycle. Though our transfers have known the ages of our kids, we have had to request the car seat and even so, they do not always have them.

Bring Tums or other medicine as we experienced some tummy problems.

Do not expect a large selection of food at the stores or markets. For example, the only flavor option for Lays chips in the store was seaweed flavor. You may want to bring a few granola bars if you like a certain brand.

Diapers (nappies) are available in the local store and they did have Pampers but if you have a preference on a certain brand, it is best to bring with you. Julia often had a nappy rash with the weather being what it is. Best to bring (or buy) some powder.

Alcohol in Indonesia is expensive and wine especially is rather limited in choice and quality.

Massages are inexpensive both on Flores and throughout Indonesia. We highly recommend the foot massage.

A few useful sayings in Bahasa: 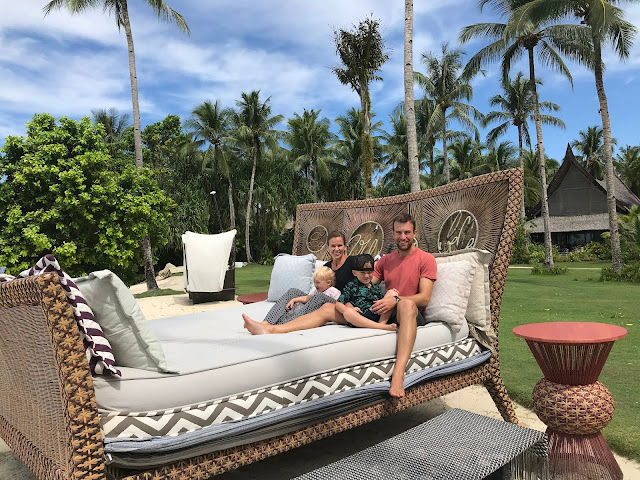 The BEST of 100+ Days of Continuous World Travel 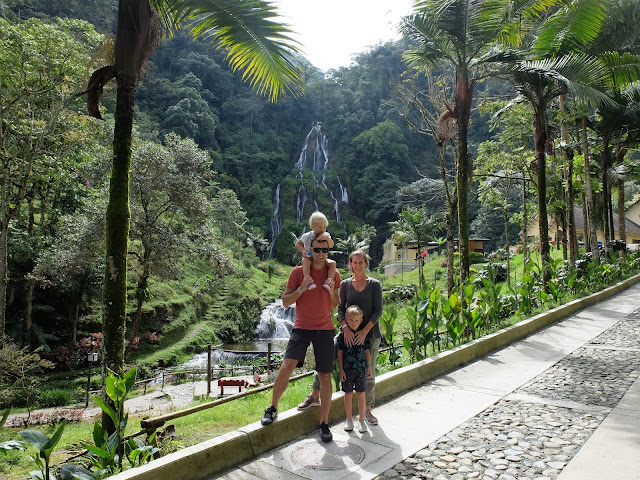 Around The World: Colombia 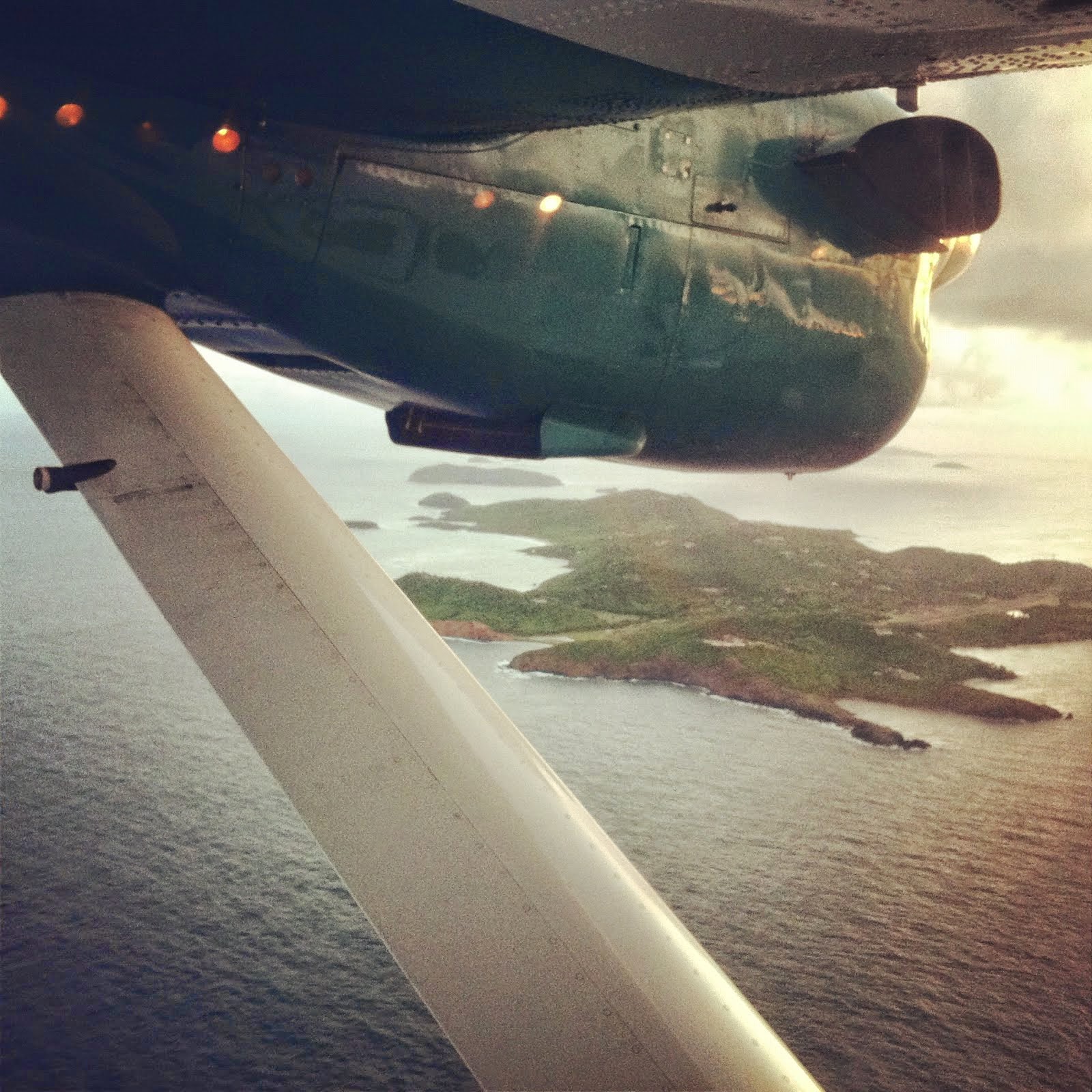 Where will you go?